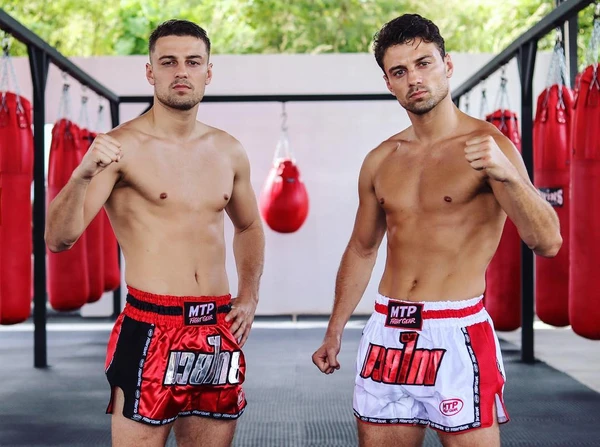 The fact that you might sweat and slug it out physically with a dummy or a real fighter/trainer at camp doesn’t mean that you should not look cool in training gyms.

In contemporary martial arts like Karate and Taekwondo, fighters wear uniform and belts to determine their rankings. There are no such attires in Thai boxing, plus there is practically nothing wrong in stepping into the camp with a pair of Gucci pair of shorts or a Versace fashion top. It doesn’t stop you from beating up your opponents black and blue (just kidding).

Every Combat sport (or sports in general) usually has a clothing system that sets them apart from each other and makes it easier to practice the sport. Thai boxing has its also, and they are;

They are one of the most comfortable and coolest shorts you can wear to training. Because they are custom made for Muay Thai, they have looser cuts around the thighs that make you use the legs freely.

It is common to suffer from bad/blistering ankles after training, that is why ankle guards are very important. Ankle guards provide the ankle joints with protection from sudden impacts to the feet.

Just like ankle guards, they are not mandatory for training or fighting, but you can wear them to protect the knee from suffering from the impacts during the fight.

When shopping for gloves, you should choose breathable gloves. Since you will be wearing gloves all the time, they will stink a lot, and thin out a lot. And you don’t want either of that. Some examples of classy fighting gloves

Acute muscle injuries are one of the common in Muay Thai, and most will happen when you train. You can wear rash guards over the body to reduce the chances of these injuries. This sportswear is also becoming very popular in other combat sports, plus they are fashionable.

In training camps, people mostly work/train on barefoot and there is no need for boots. However, for those who go on runs or jogs and other aerobic activities, it is recommended you wear good high-friction trainers.

In a surprising trend, not only Muay Thai fighters at muaythai-thailand.com wear the fighting sport wears, but there are celebrities and fashion stars who don the attire too. Brands like Versace, Guess even produce Muay Thai shorts for fashion, and many stars wear them to live performances.

Far from being for fashion alone, Muay Thai wears not only keeps the fighters safe but also their opponents (we don’t fight to kill).

Lastly, Muay Thai clothes and sport wears are a symbol of the long culture of the combat sport.

What You Do not Learn About Fashion Shopping

Things You Can And Can’t Use Your Clothing For

The Ultimate Strategy For Fashion New